This year's Derby Day has to start with one image: Naomi Campbell. The ubermodel is here to promote her Australian version of reality model TV show, The Face, but Lexus Australia managed to secure her for their Lexus Design Pavilion, a three-storey extravaganza with a Jamie Durie-designed deck on top, and a Hihou pop-up restaurant in the middle. Naomi might have arrived 90 minutes late - Bruce Keebaugh, from The Big Group, made sure to appease the journalists with a tray of Neil Perry-cooked food while they waited under the sun - but when Naomi arrived, she was all smiles and answered questions freely. Hooray for no supermodel tantrums. She also looked stunning in a Dior houndstooth dress and a Philip Treacy hat from Christine.

There were other stand-outs, though. Jennifer Hawkins in a bondage-inspired leather dress by Maticevski, Rebecca Judd in J'Aton, Lara Bingle in next to nothing (but she looked good wearing it), Poppy Delevingne in J'Aton Couture. All beautiful.

Over at the Emirates marquee, a Dubai theme started at the entrance: the exterior of the red, gold and white marquee echoed Dubai's historic buildings, and many furnishings inside came from Dubai markets. Yes, that was a "waha" well, alongside Australia's highest definition LED screen. On the terrace, lounge chairs allowed guests to watch the track in reclining position, under swaying date palms. And who could bypass The One & Only Spa, designed for hand and foot treatments? Liz Cambage enjoyed the marquee, as did The Bachelor's Tim Robards - as many a girl stopped him for a photo.

La Maison G.H. Mumm stood out because of its French theme - Moulin Rouge dancers had been flown in from Paris, and they kicked up a storm on the stage at various intervals. More men had their iPhones on record than anywhere else.

Myer marquee is always a big drawcard, and this year's Australian Homestead theme didn't disappoint: the wood-interior was set off against Australian flora and fauna - sprigs of wattle on the wooden food platters was a lovely detail - and Jennifer Hawkins said it was a time to let her hair down. 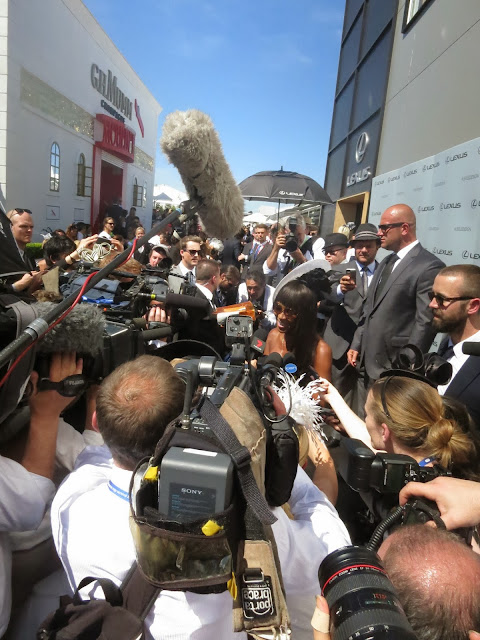 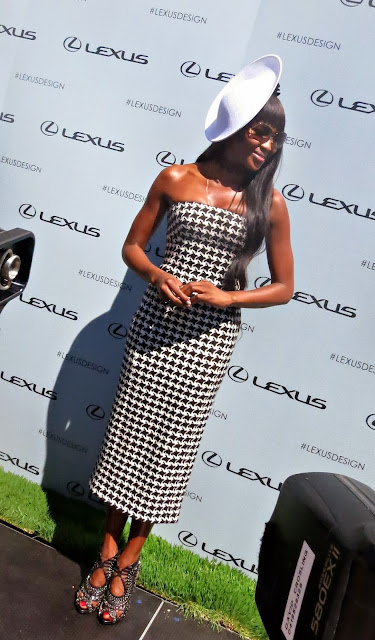 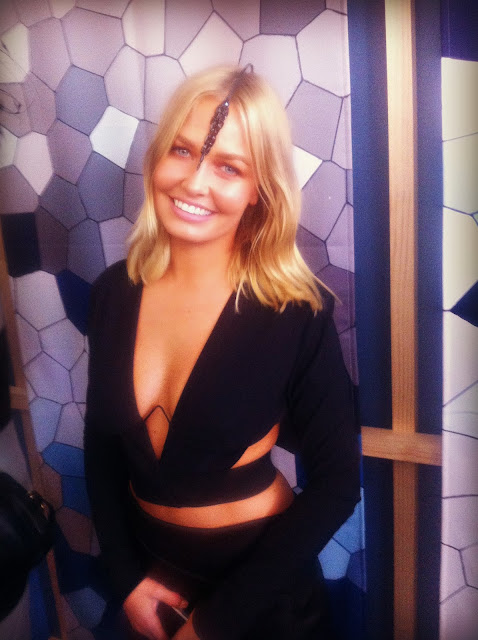 Lara Bingle is super nice. She just is. I'm glad she's found love with Sam Worthington, who might well be making her wardrobe choices, too, judging by this outfit. I have nothing bad to say about either of them. (@LexusAustralia #lexusdesign) 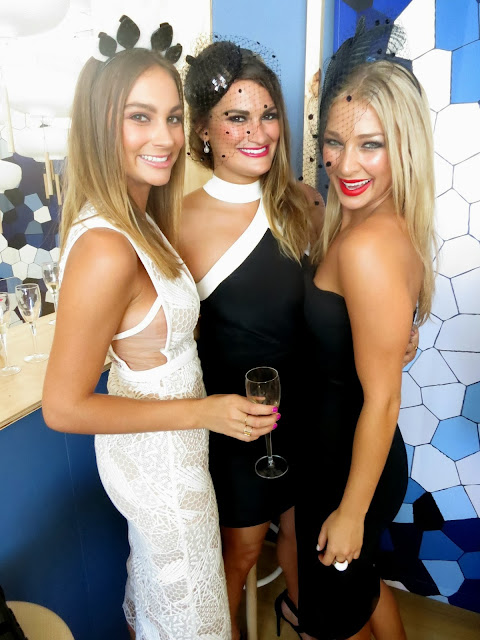 Anna (right), a contestant on The Bachelor, brought her two sisters along to the Lexus marquee. They were all wearing Mimco headpieces, and Charlotte (sister at left) is in a Manning Cartell dress. (@LexusAustralia #lexusdesign) 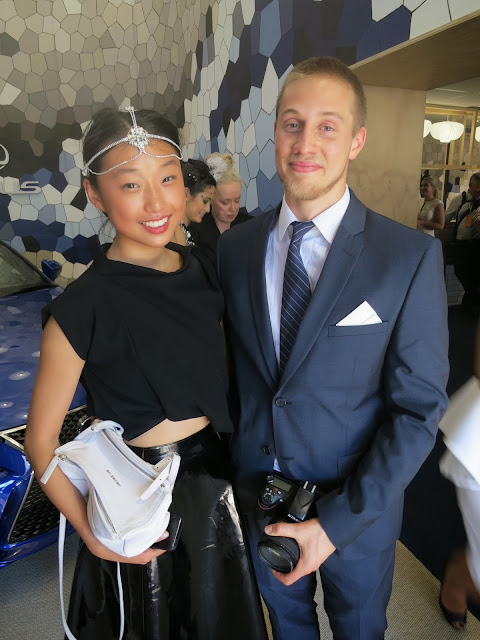 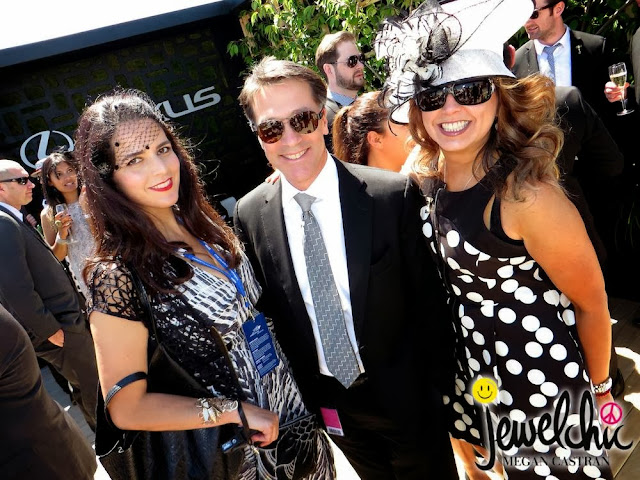 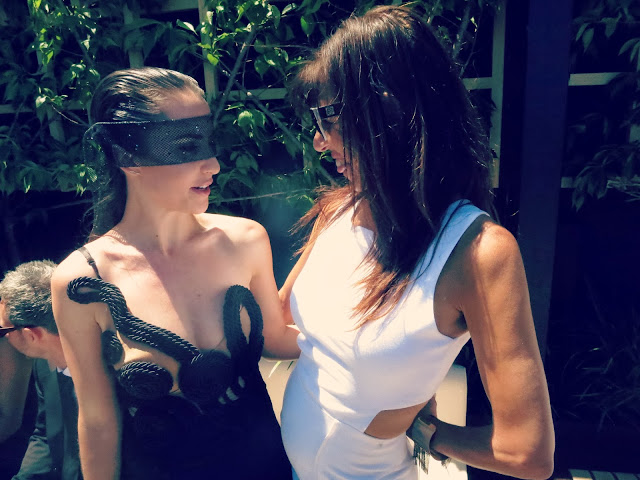 I wish I could remember who the girl on the left was wearing. It was someone fancy. Meanwhile, the one on the right was Watson x Watson. @LexusAustralia 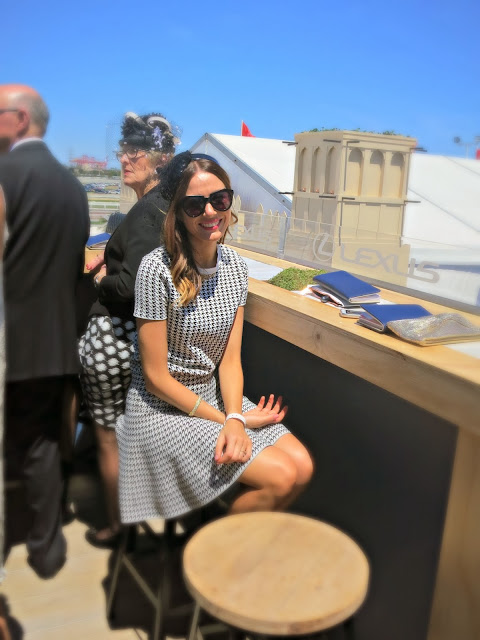 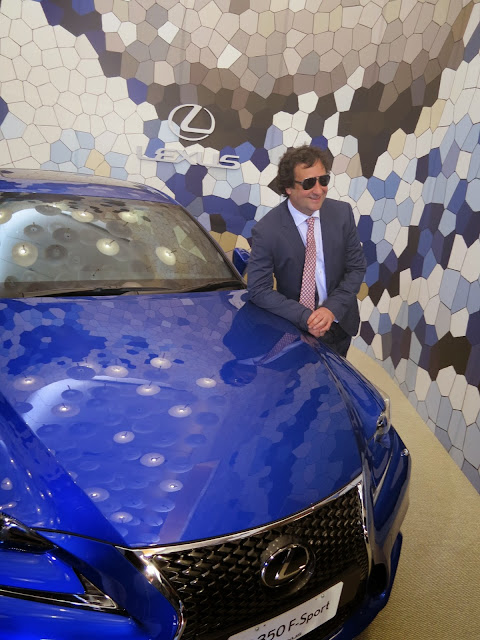 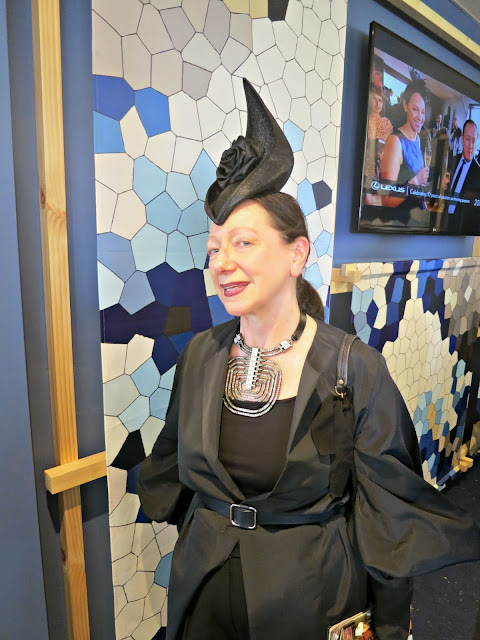 Christine Barro was the person who lent a Philip Treacy hat to Naomi Campbell. @LexusAustralia 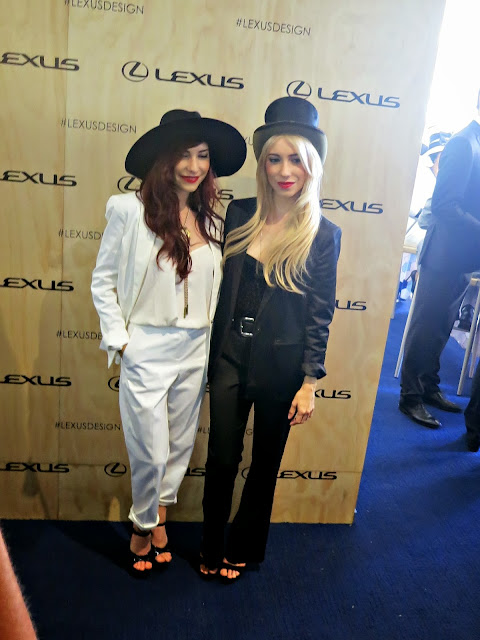 The Veronicas! They're so little! 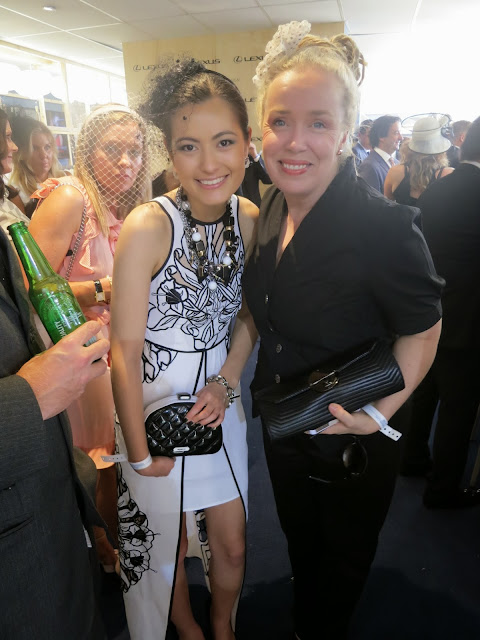 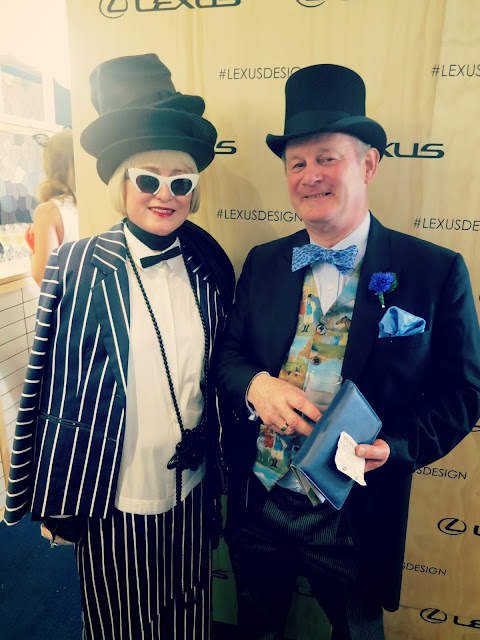 When one hat is not enough - wear three! 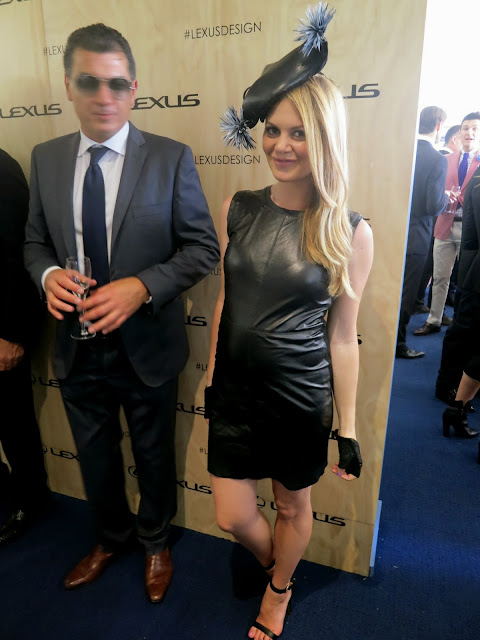 She's pregnant! In a black leather dress! Only blogger Jess Dempsey could pull that one off. 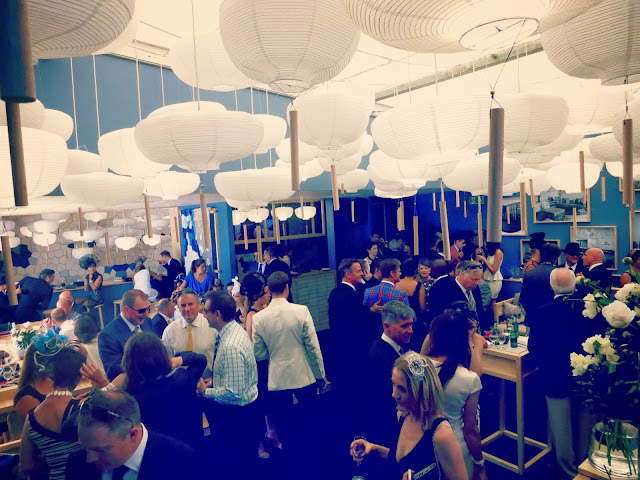 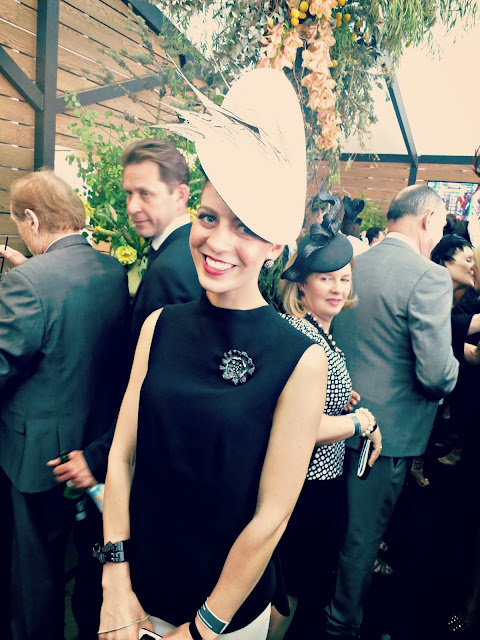 My favourite hat of the day: at Myer marquee, from The Hatmaker in Sydney 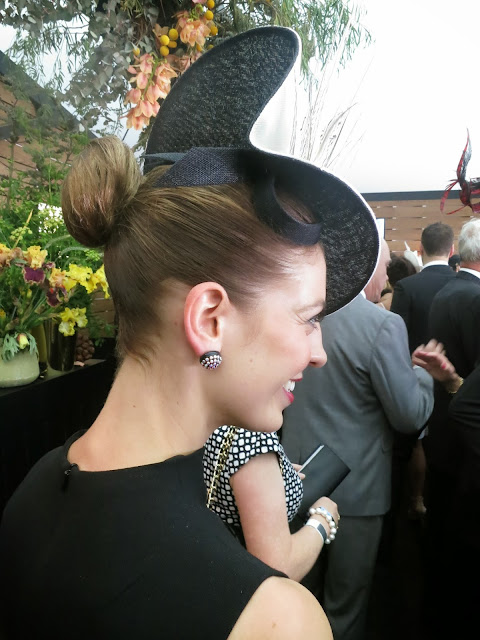 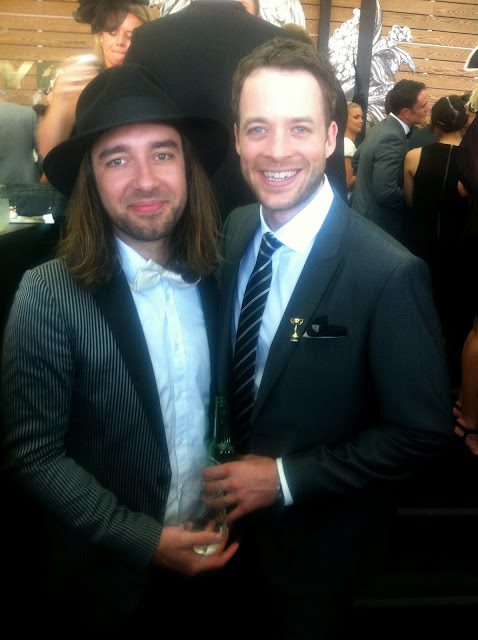 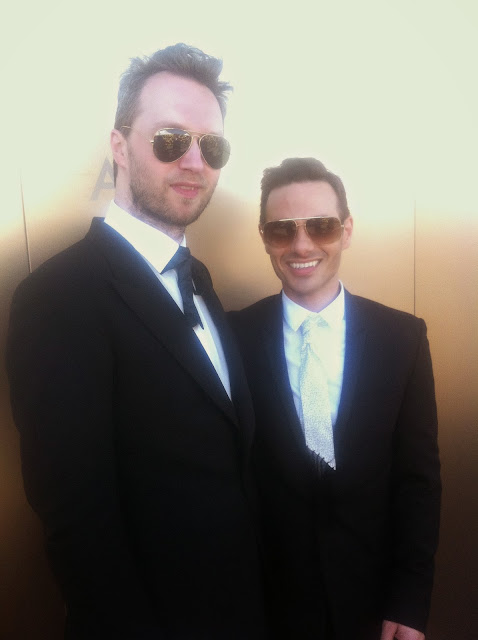 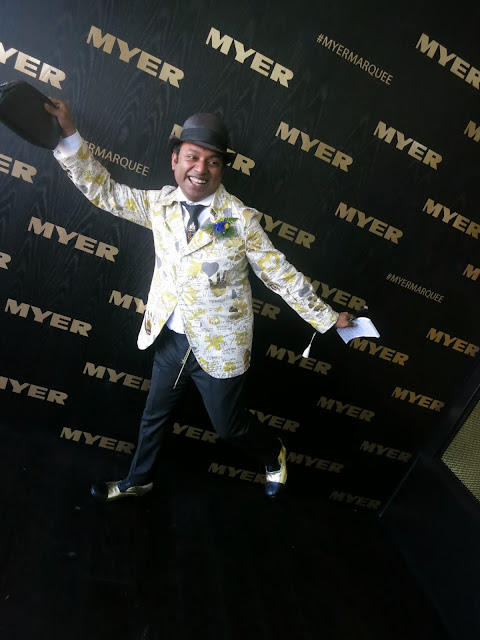 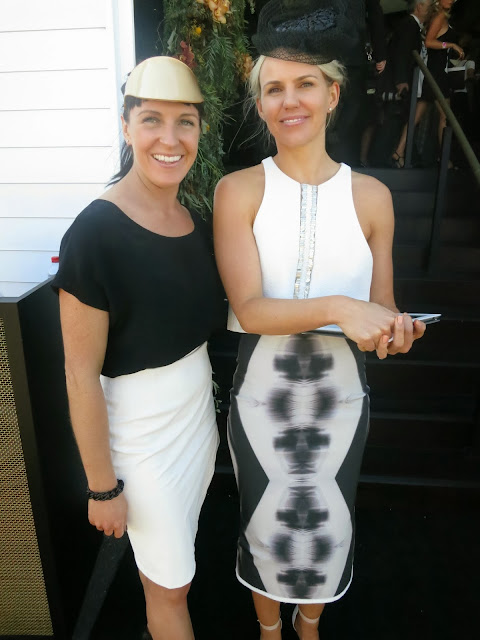 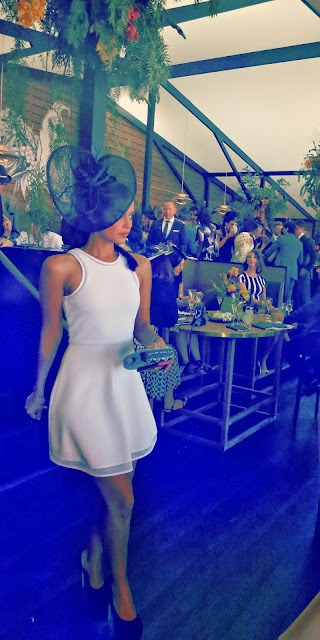 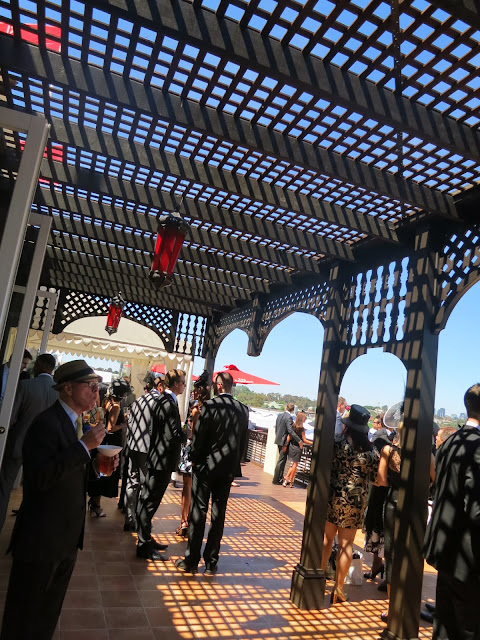 At Emirates: a scene out of Dubai. 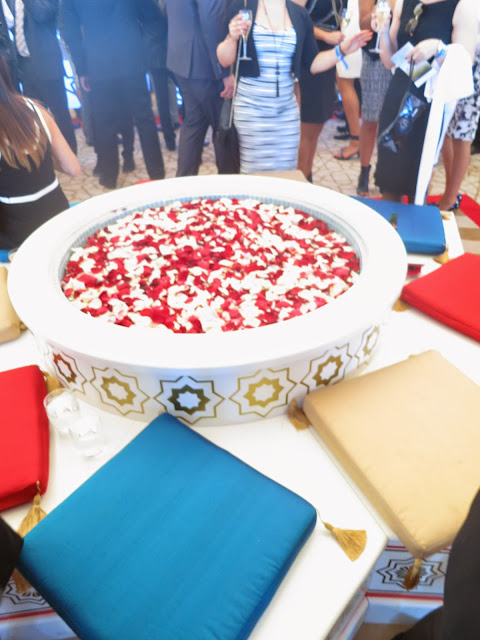 Yes, that was a well! At Emirates. 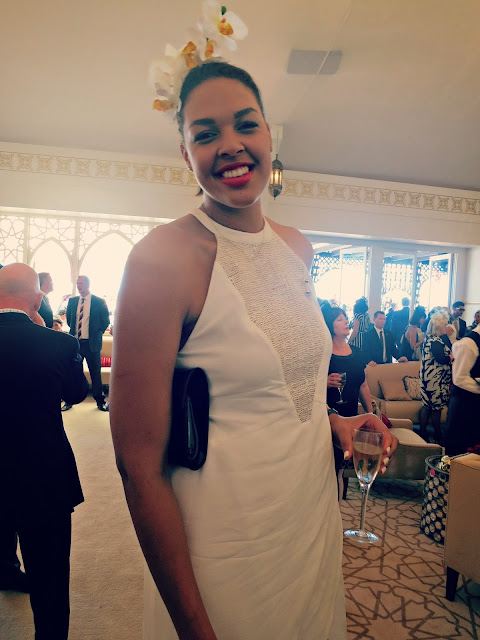 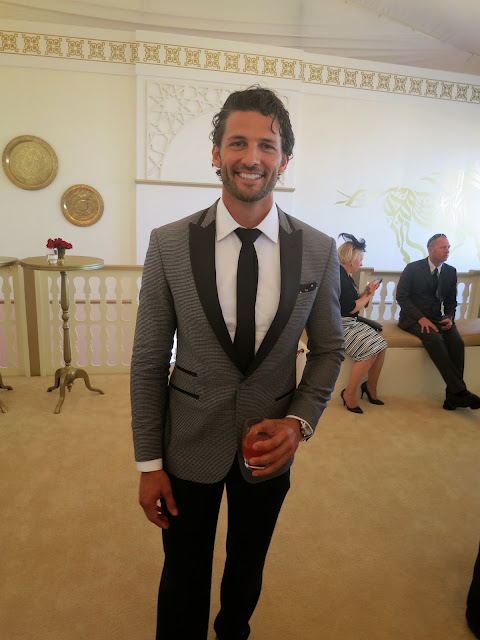 Tim Robards at Emirates. He said that he ummed at ahhed about doing the show until he discussed it with his parents, who said that as long as he was being true to himself, he would be fine. And he says now: he has no regrets. But he did have to stay away from a number of marquees on Derby Day, because Bachelor contestants were there, and he wasn't allowed to let on who the winner is... 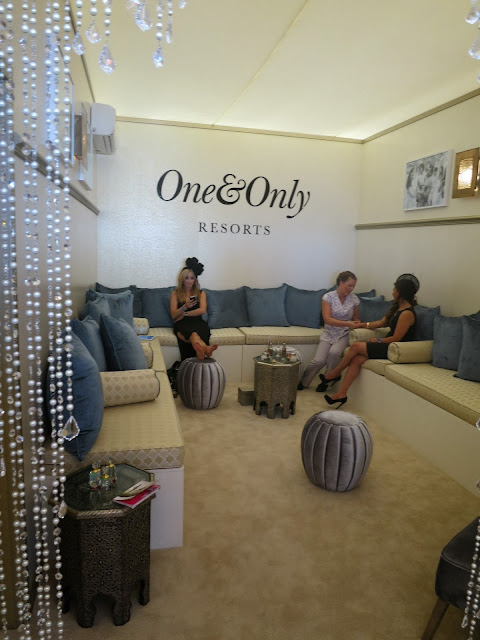 Just a smidgen of luxury. 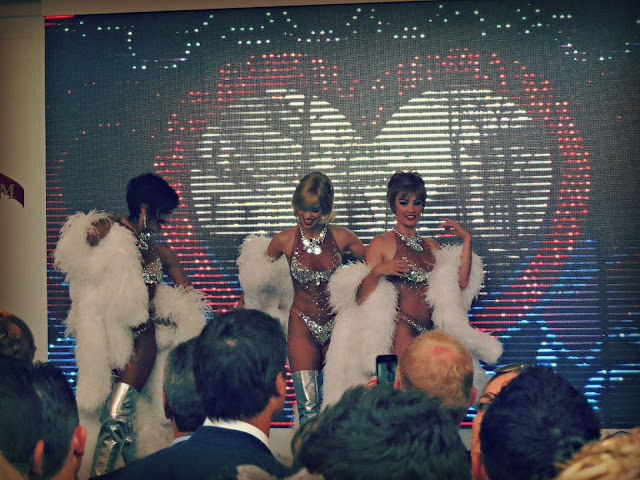 
Posted by Book club enthusiast at 5:13 AM